The Yorkshire 3 peaks challenge is to complete a series of 3 ‘peaks’. It’s route stretches a massive 24 miles, just 2 short of a marathon. In addition, the challenge consists of 3 mountains with 5,200 ft of total ascent. Henceforth, the challenge is to complete it under 12 hours. The three peaks are: Pen-y-ghent, Ingleborough and Whernside. The Yorkshire 3 Peaks assist in the formation of the Pennines range. Also, the beginning of the River Ribble. The fastest time for completion was set in 1996, with a universally thundering 2 hours and 29 minutes. 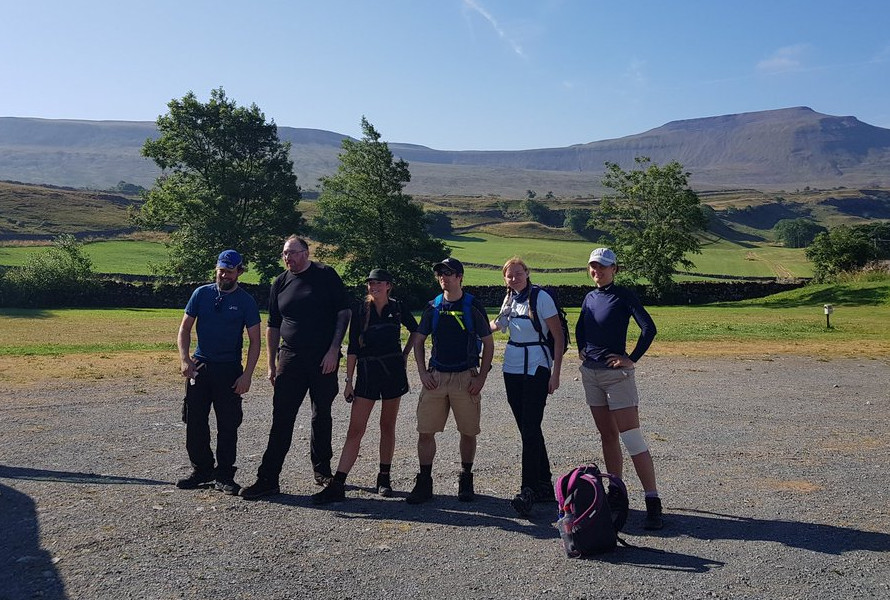 Local to AYOM, The Space Centre is the chosen charity in question. Established in 1993, the centre has the largest multi-sensory environment in the United Kingdom for people with special needs. Their website gives info all about the charity. The total currently sits at £1,100, however it fails to come to a halt with donations still being made.

After an exciting 90 minute journey from Preston to Ribblehead. The mountaineers and support team sat for the last meal together. Before the Yorkshire 3 Peaks. Thankfully, The Station Inn provided excellent service and food to get them ready for the following day. The Inn offered craft beer and cider alongside other beverages. The strawberry and rhubarb cider quickly became a favourite among the team

Although the night was a nervous one, the mountaineers were keen. The Station Inn allowed them to converse with climbers who had just finished the Yorkshire 3 Peaks. It’s location isn’t just in the heart of the Yorkshire 3 Peaks. But also it offers a traditional and unique service, difficult to find elsewhere. Therefore an attractive place to settle for the night.

The mountaineers had completed the Yorkshire 3 peaks many times before. But never all together. The team trained by defeating the mountains singularly before all together. One of the team, Dan Fletcher gave a comment on the prep work needed. “Doing the Yorkshire 3 Peaks was always going to be a real tester. I train a lot each week running and doing Muay Thai. However this needed different attributes. I did practice walks with the others and built up my overall fitness as did everybody else.”

Henceforth, the hikers needed the correct walking equipment, attire and supplements; but also luck. The Support Team filled cool boxes to the brim with ice, water and energy drinks. Hydration and correct nutrition played a key role in completing the challenge.

After a tasty meal and a good drink, the mountaineers got ready for an early start in the morning. Meanwhile, the support team got all the supplements ready in the van and other last preparations.

At 6am the walkers began Whernside. Although Whernside was described as the easiest, the support team made sure the climbers were ready for the next peak. At 9am the team arrived; awaited by the support team. They supplied them with bacon sandwiches and the pre prepared provisions. After photos were taken for social media, the team took on their next peak

As the climbers surged over Ingleborough, the support team explored the stunning countryside of Ribblesdale. The landscape of Ribblesdale held a large quarry, mesmerising to look at. A characterful railway station and a host of gorgeous natural sites.

The support team arrived at the next stop off point to meet the climbers for the second round. While awaiting, they got to explore the pleasant village of Horton in Ribblesdale.

After finishing the second of the Yorkshire 3 Peaks at 11am, the team reached the next stop off point. Here, they consumed more provisions meanwhile ailing their injuries, as fast as possible. By doing this, they could have a shot at completing the challenge. After a fast pitstop, the climbers set off again.

The final mountain, Pen-y-Ghent, had the steepest ascent but was also the shortest. After completing the last peak, the team received their last stop off provisions before continuing yet again on the final stretch. After a courageous 24 mile trek, the team arrived at the finish, tired, exhausted, but proud, very proud. As they should. They posted an absurdly fast 10 hours and 1 minute, nearly 2 hours faster than the challenge time.

The team received a medal and certificate for their outstanding achievement and commitment. Dan Fletcher gave us a finish line quote. “We needed everything to line up and on the day thankfully it did. We had enough provisions, we planned the route and it came off great. We couldn’t be prouder of posting a time of just over 10 hours. On top of the actual challenge to hit over £1,000 for The Space Centre is such a good feeling. That money will be very welcome to them and I’m so happy to have completed the challenge for them. Having visited recently, we all knew how much even small donations mean to them.”

The final gathering at The Station Inn was an exhausted one. However, an extremely honorable one. All the AYOM mountaineers had completed something that seemed next to impossible. And to complete with 2 hours spare is absolutely incongruous.

The rest of AYOM admitted to be incredibly proud of the team's achievement and honored to work for a firm with such charitable and ‘go the extra mile’ attributes. The support team also received great thanks from the mountaineers for their assistance during the challenge.

What is a debt recovery agency?

Debt collection at AYOM – An interview with a collections agent