Debt recovery automation is the practice of debt recovery using automated processes. Consequently this form of debt recovery is cheap. However as a recent incident highlights, not the most practical nor the most pleasant. In effect, leaving one grieving spouse in great distress. 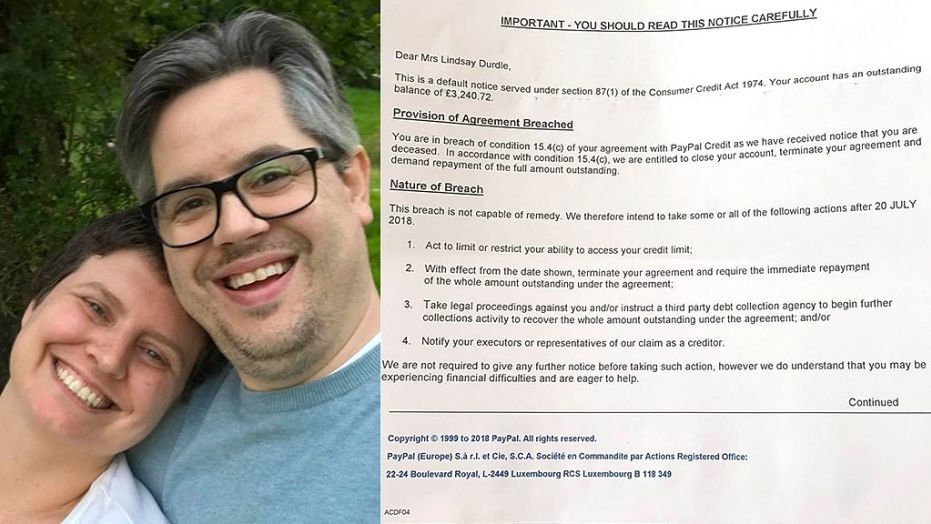 Lindsay Durdle was a very well liked and loved wife and friend. Her husband described her as “my brilliant, creative, funny, clever wifey”. Known to be always smiling and laughing, she could never wait to go home to her “house, garden and cats she so loved” in Bucklebury, West Berkshire. Lindsay unfortunately received diagnosis for breast, brain and lung cancer. A year and a half onward from her initial diagnosis, she died age 37, on the 31st may 2018.

Consequently her husband, Howard Durdle, 40 set up a crowdfund to raise £4,500 to donate in honour of his wife. Lindsay had chosen several charities including Breast Cancer Research UK and Breast Cancer Care. Currently the Crowd Fund currently sits at £4,365, with 136 donations. “Lindsay did not get bitter, or give up on life, and she didn’t let people call her “brave”. She preferred “strong””.

Of course, Lindsay was one of many who uses PayPal for online transactions. Shortly (3 weeks) after she had died, Howard, her husband, notified PayPal of her death. Therefore PayPal sent out a letter intended for Lindsay stating her account had an outstanding £3,240.72. The letter went on to claim she was “in breach of condition 15.4(c)”. Additionally threatening to take legal action on the matter including instructing a “debt collection agency”.

In Britain, spouses are not responsible for their deceased partners’ debts. Such debts must be receive payment through the estate of the person who died, including money or possessions.

PayPal claimed the service was automated and as soon as their team found out about it, they contacted Howard Durdle. Henceforth, In a later statement PayPal apologised for the “understandable distress this letter caused”. Furthermore the company also offered their support. In result clearing the outstanding debt and closed down his wife’s account as he requested.

PayPal reported to be “urgently reviewing” their “internal processes to ensure this does not happen again”. Howard Durdle replied “I’m a member of the charity Widowed and Young. I’ve seen first-hand in there how a letter like this or something like it can completely derail somebody. If I’m going to make any fuss about this at all, it’s to make sure that PayPal or any other body that might do this kind of insensitive thing; recognises the damage they can caused to the recently bereaved.” PayPal predicted the likely cause of the “insensitive” debt recovery automation. It was either: a bug, bad letter template or human error. However what they were sure, was that they cannot share the cause as its an “internal matter”.

Why AYOM does not use debt recovery automation

AYOM restrains from using debt recovery automation. It gives customers a poor quality and false service. Having trained collectors allows for a 2 way conversation and a relationship between a client and collector. Automation fails to provide this. Debt recovery automation may be the cheaper option; it can however be troublesome as is the case with Mrs Durdle. AYOM strives to offer excellence and quality in its service. AYOM ensure the customers are listened to as well as possible. Hence allowing the experience to be as efficient as possible for both parties.

AYOM have a quality team of experienced personnel to carry out mediation on your behalf. This is the biggest advantage of not using debt recovery automation. The AYOM team provide an expert service that investigates your situation in depth.

The service AYOM provide follow a set of core values. The core value trio consists of integrity, commitment and empathy. Neither of these values exist in debt recovery automation. We have integrity, giving clients the respect and value they deserve. AYOM have commitment, working as a team. AYOM’s bond and relationship lets us offer great dedication and commitment to every customer. Finally, we have empathy. We take the time to investigate and understand our clients situation. Henceforth allowing to emphasise with the customer. Having a conversation as equals. Our aim is to reduce the stress financially and emotionally of our clients as efficient as possible.

AYOM gives its respects and condolences to Howard Durdle. And everyone Lindsay was close with. AYOM hopes PayPal amends the fault to prevent similar cases in the future. And not cause distress to people like Lindsay and Howard Durdle.