A touch insensitive or a successful strategy?

This week parents in Rhyl have been taken aback by a school’s text message. A message sent to parents of Ysgsol Bryn Hedydd primary attempts to spark movement in recovering £850 worth of debts. The debts are a result of unpaid school dinner fees, eating into the school budget.

The text was worded bluntly, but to the point. It read:

“Whilst I appreciate it isn't the best time of year, can you please make every effort to pay off your dinner debts. As a school this currently stands at £850 and we DO NOT offer a credit system for meals. You wouldn't go into Asda and ask to pay next week or even next month. Mr Cannon."

Parents took to social media, furious at the tone. Some describing it as “rude” and a “joke”. However, from a debt collection point of view, it has been a successful reminder. In a press statement, the headmaster confirmed the text resulted in £250 of the debt being recovered immediately.

The school itself has been documented for being oversubscribed. Some pupils are being taught in a converted double decker bus and it currently has over 470 students. This is despite being designed for 290. The school has also recently been asked to save £40,000. With such odds against them, it was imperative to attempt to recover the £850.

In his statement, Mr Cannon added:

“Currently 35% of parents/ guardians have a school meal debt. This is £850. This is a cost that can be borne by the school unless it is paid. We regularly remind parents of the need to clear any school meal debts. The reminder issued via text resulted in £250 of debt being cleared right away. We regularly inform parents that there’s the option for free school meals if any struggle to pay. What we would emphasise is that no child would ever go without a school meal." 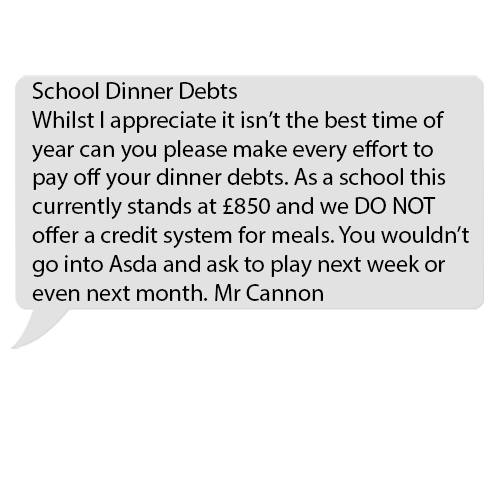 This situation perfectly demonstrates certain issues with consumer debt. Often, attempts to ask for the money may be considered over aggressive. In context however, it can be reasoned why the school chose to ask in a firm but fair manner. The important aspect of this process is that collectively, all those who received the text owed money. In the realm of debt collection, the creditor needs to make their stance certain. Failing to do so will not prompt payment and could see the debt drag out longer. In this case, the text has seen part payment and an improvement of the situation.

Whether the text is “uncalled for” is a matter for debate. However, sending a reminder of due payment when debt is undisputed, is not over the top. The language used may have been firm, but it was fair. Hurting the feelings of some recipients may anger some eyes, but looking objectively, the school must promote action. It needed to make itself clear and that is what Mr Cannon did.

Speaking about the story, Corporate Client Manager Ian from AYOM gave our view:

“This is not directly related to instructing a debt collector but is relevant to our work. We often discuss with clients that nobody ‘enjoys’ talking to debt collectors. We regularly call those who owe money to establish details of the debt. Often, we receive aggressive responses (similar to the school) despite our duty to remain professional. That is mostly due to anything involving money potentially becoming emotional. When an individual owes money, talking about it can be awkward. Facing it can be daunting.

In this instance, the school has done the right thing. It has had to wait to be paid and has issued a very clear message that the money is affecting their finances. Without this clear statement, non-payers may not understand the severity. This is like our consumer clients with large volumes of debtors. We must remind them that combined, many small debts can create large drains on accounts.

This instance if anything, backs up our arguments that debt collection is worthwhile. A single text message to those owing money prompted almost 30% of the money to be recovered. While it has not been published, we are confident that number will rise. If debts can be recovered with 1 simple message, it adds to the weight that strategies we employ will be successful. We hope the issue is resolved fully with the school as soon as possible and support their stance.”

SMEs hopeful of bounce back in 2022 despite debt levels